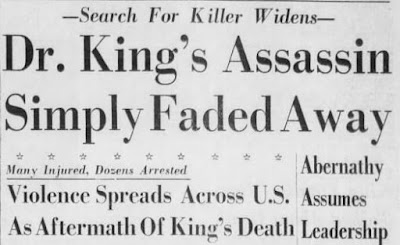 Cabarrus Reacts to the 1968 Death of  Rev. Martin Luther King Jr. The Daily Independent (Kannapolis, NC), 5 Apr 1968, p. 1. 50 years ago, Rev. Martin Luther King Jr. was originally scheduled to tour North Carolina while campaigning for  Reginald Hawkins, a Charlotte dentist who was the first serious black candidate for governor in a North Carolina Democratic Party primary. King was instead diverted to Memphis, Tenn. in support of a strike by sanitation workers.  It was a time when issues regarding civil, labor, and voting rights, which had long plagued the African American community, caused tensions to run high.   After his death by an assassin's bullet at the Lorraine Hotel on Thursday, April 4, 1968, frustration and anger resulted in  violence in many cities across the country. What was the reaction in Cabarrus County the week following the tragedy? On the morning of April 5, it was reported that all ABC liquor stores in Concord and Mt. Pleasant were closed on the
Post a Comment
Read more
More posts