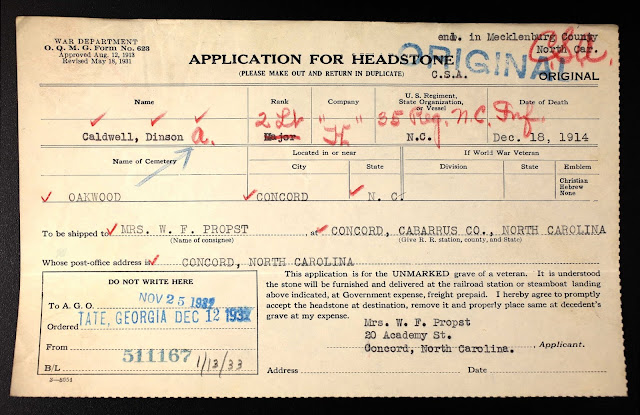 Since March 3, 1873, the US Department of Veterans Affairs (VA) has furnished government headstones or markers for unmarked graves of deceased eligible veterans. At first, this applied only to burials of honorably discharged Union Civil War veterans in national military cemeteries. But on February 3, 1879, Congress extended the benefit to veterans interred in private cemeteries. In 1906, Congress authorized the furnishing of headstones for unmarked graves of Confederate soldiers. Veterans of all subsequent conflicts are eligible for the headstone benefit. Where a headstone already exists, applicants can request a medallion to attach.


While headstone and medallion application forms, filled out by next-of-kin, can provide excellent information for your family research, they can also bring to light questions for further study. Information provided by an applicant was meticulously checked by the VA for accuracy and to ensure the veteran had honorably served or received an honorable discharge.

The above 1932 headstone application, made for Confederate veteran Dinson Alexander Caldwell, using information provided by his daughter, Mary Catherine "Kate" Caldwell Propst (wife of William F. Propst) reveals discrepancies with information found in other records. The notes in red were made by the VA.


The administrative box in the lower left of the application provides the processing information for the headstone. The order was received by the Adjutant General Office in Tate, Ga., on November 25, 1932 and followed up on December 12, 1932. The VA shipped the headstone to Mrs. Propst on January 13, 1933, with a bill of lading number 511167. The headstone, which now resides in Oakwood Cemetery, Concord, is inscribed:

Dinson Alexander Caldwell was born in Cabarrus County on July 27, 1831, the son of John Caldwell and Mary Allen Caldwell. He grew up in Mecklenburg County and learned the construction trade in Florida. He then returned to North Carolina and married Harriet Miller. With the outbreak of the Civil War, Caldwell enlisted in 1861 with Company F, 5th Calvary, in Mecklenburg County, and later served in Company H. At the time of his death in 1914, Caldwell resided at 68 North Spring Street, Concord. He was survived by seven children: Mary Catherine Propst, Janie Denison Glass, Dr. Paul Caldwell, Young C. Caldwell, Garah Bruton Caldwell, Ruth Eumenas Hastings, and Wilna Gray Caldwell.

For more information about ordering a military headstone, marker or medallion, see the VA website: https://www.cem.va.gov/cem/hmm/index.asp .