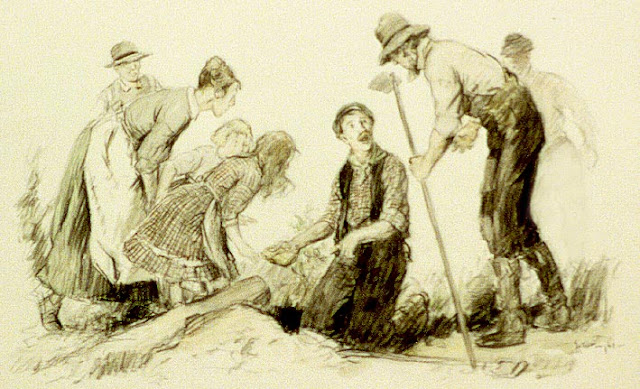 Cabarrus Man is Told by Legless Apparition  to Dig for Treasure Today we celebrate Halloween with a 130-year-old Cabarrus ghost story. On a dark evening in early April of 1887, Columbus Misenheimer, a well-known carpenter of township No. 7 (Gold Hill), was walking home rather late from work. With still some distance to go, he stopped to borrow a lantern at the home of his parents, Mann Reid Misenheimer and Jane Susannah Rufty Misenheimer, then continued on his way. He had only gone a short distance when he saw another light approaching from the other direction. As the light grew close, to his sudden and infinite horror, the figure holding the light was a man...or at least the upper half of a man. According to an article that appeared in The Concord Times , Misenheimer avowed that the man's head, arms and body were clearly defined, but he was without legs and feet. As Misenheimer was about to take off in a fright, the apparition spoke to him kindly, assuring him he wo
Post a Comment
Read more
More posts