In the second half of the nineteenth century, America was flooded with new immigrants. These new immigrants, especially the millions of Irish fleeing Ireland’s potato famine of 1846, helped to popularize the celebration of Halloween nationally. Its origins date back to the ancient Celtic festival of Samhain and the All Saints Day celebration called All-hallows or All-hallowmas. 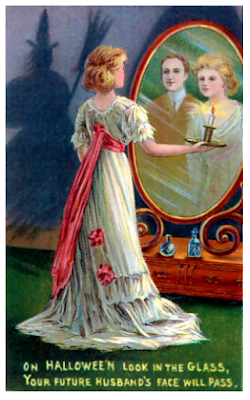 By the late nineteenth century, there was a move to mold Halloween into a holiday more about community and neighborly get-togethers than about ghosts, pranks and witchcraft. Halloween parties for both children and adults became the most common way to celebrate the day. Parties focused on games, foods of the season and festive costumes. Hostesses enjoyed creating unique and elaborate celebrations. Of course Jack O'Lanterns glowed from every nook and corner. Refreshments were often mulled cider, grapes, apples, and nuts while a "dutch lunch" was served at midnight. This was typically bread, coffee, cold meats and cheeses.Young women also believed that on Halloween they could divine the name or appearance of their future husband by doing tricks and telling fortunes.

On Saturday, October 29, 1904, Miss Anna Belle Barrier of Mount Pleasant had just such a party. According to the October 31 issue of the Concord Daily Tribune, she had "quite a large number of young people gather at her home...The early part of the evening was filled with a mingling of weird ghost stories and the merry voices of players as they frantically yelled, 'Robber,' 'Thief,' 'Burglar,' etc." in a game of Sherlock Holmes. "As the wee small hours began to draw near a professional fortune teller was produced, and today a score of young ladies are rejoicing in the fact that they know precisely whom they are going to wed."Miss Bessie Heilig and Miss Jennie Cook followed with other parties on Monday the 31st. 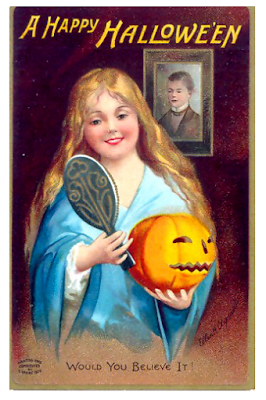 The Concord Daily Tribune on October 30, 1906 suggested other Halloween matchmaking games such as mystery cake, three bowls, and the candle fortune. For mystery cake, tiny white bags were to be inserted under the icing containing flour, which indicates a rich marriage; sugar for love; cornmeal meant that you will have to work for a living; and an empty bag foretold single blessedness for the next year. The cake was cut by drawing lots and cutting the first slice was considered a great honor.

For the bowl game, three bowls were placed on a table, one filled with water, one with milk, and the other empty. Each young lady was then blindfolded, turned around three times and faced toward the bowls. If she put her finger in the water she will marry a bachelor, in the milk she will marry a widower, and if her finger touches the empty dish she is fated to remain single.

For the candle fortune, lighted candles were to be placed in an open window. The one which burns the longest is the one who will remain faithful to the end. Of course the candles are named before being lit.

It is not known if Anna Belle Barrier's fortune came true, however she did marry North Carolina lawyer Willard M. Axley in Spokane, Washington in 1912. She was the daughter of Paul A. Barrier and Mary Cooper Bangle. By 1920 Anna Belle and Willard returned to North Carolina and settled in Murphy, Cherokee County where they remained with their daughter Ellen.