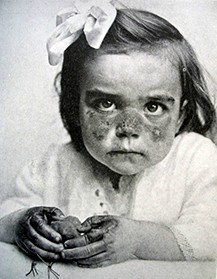 "Black Tongue" Takes a Toll in  Cabarrus County and Across the South The following contains excerpts from Gail Jarrow's book  Red Madness:How a Medical Mystery Changed What We Eat  and her website http://www.gailjarrow.com/pellagra.html. Pellagra struck all age groups. Photo:  http://www.gailjarrow.com/pellagra.html Between 1900 and 1940, at least 100,000 individuals in the South died of pellagra, or "black tongue," a dietary deficiency disease. The accelerated rise of pellagra was especially difficult in farming and mill communities. Its effects were felt in Cabarrus County as workers struggled to feed their families during times of economic hardship.  The July 6, 1911  Charlotte Observer  reported that "Mr. J. D. Bost, a well-known and popular young man of the city [Concord], was taken to the Charlotte sanatorium this morning to be treated for pellagra. Mr. Bost's health failed several months ago and and it became necessary for him to
1 comment
Read more
More posts