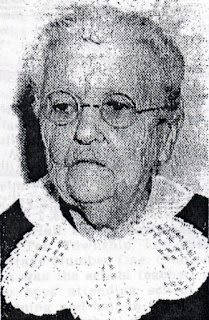 Emma Hudson Eagle: First Matron of Cabarrus' Stonewall Jackson Training School Emma Hudson Eagle, 1939. At an age when most are considering retirement, Emma Hudson Eagle took her first job outside her home. She was 53 when she became the first matron of the King's Daughters Cottage at the Stonewall Jackson Training School in 1911. A native of the Rocky River community, Emma J. Hudson was born the fourth of six children to farmer Seth Hall Hudson and Frances Alvira "Fannie" White  on 8 Dec 1858 . Her father was a Confederate soldier, and although he survived the war, he died shortly after his return. After his death, the family moved to Concord. In a 1939 interview, The Concord Tribune described Emma's childhood schooling in the years after the war: "She went to an old log school house with an immense log fireplace at one end. One long desk was nailed to one side of the room and there the older students sat to do their writing. The others sat on cru
Post a Comment
Read more
More posts