During the early 1900s, the United States found herself with a very uncomfortable neighbor to the south. The violence of Mexican revolution frequently spilled across the border into Texas and New Mexico. After Mexican bandit and general Pancho Villa deliberately killed over 30 Americans and burned Columbus, New Mexico, President Woodrow Wilson called the nation's militia to arms.

Luckily, Company L was able to return home to Cabarrus on February 8, 1917, where they found a big homecoming awaiting them. According to the Concord Times, they arrived by train at 3:00 a.m., but remained on the train until 8:30 a.m. and then marched to the court house where they were met with a large reception and parade. Unfortunately, the worsening war in Europe again forced Company L to recruit to full war strength in March of the same year.

The below photograph of Company L was taken on July 20, 1914, two years before their Mexican border action and three years before entering World War I. It shows the company assembled on the side steps of the Post Office building (corner of S. Union and Foard Streets), facing Foard Street. The only man positively identified is company artificer (blacksmith who makes fuses, shells, grenades and other armaments) John F. Barnhardt, fourth from left, front row. The man in front of Company L is probably Captain Louis A. Brown, president of Brown Construction Company, the building seen at top right.

The roster as reported by The Concord Times was as follows: 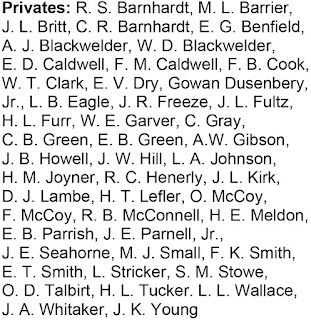