Death notice from The Charlotte Journal , 29 Apr 1836, p. 3. A Tale of Two Cabarrus George Millers Genealogists have learned many early ancestors used the same personal names over and over again. The same name might appear in each generation of a family, sometimes without any middle names or convenient designations like "Senior" and "Junior." When "Senior" and "Junior" were used, it might be to differentiate between an older and a younger person who had the same name (women as well as men) but who were not necessarily parent and child; in fact, they may not have been related at all! Even when parents gave each child two personal names, it was not unusual for the children to have one name in common. Cabarrus Germans frequently gave the same first name to several sons who went by their different middle names, like Johann George, Johann Michael, and Johann Henrich. Precisely because these situations exist, genealogists quickly learn, as a way
Post a Comment
Read more
By Cabarrus Genealogy Society March 22, 2015 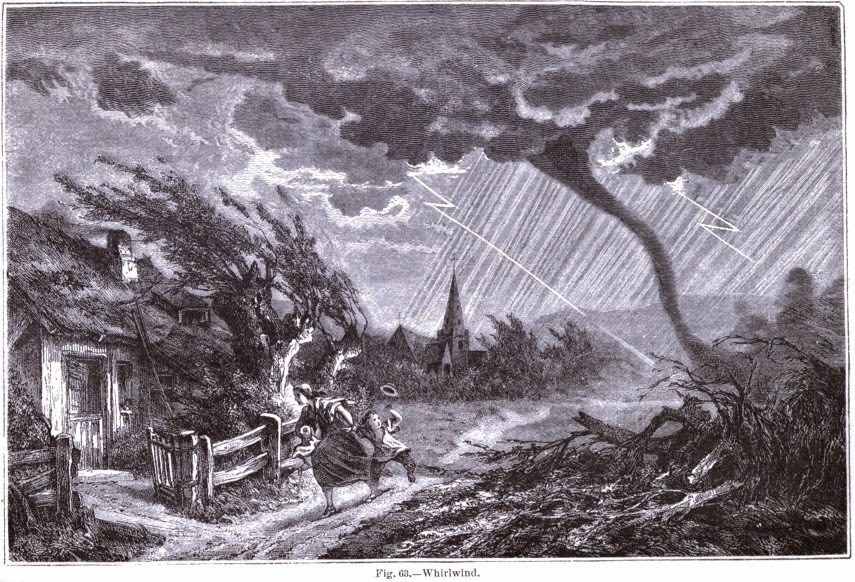 March 22, 1929 Tornado Strikes Cabarrus County Trombes or whirlwinds ... "scattering terror and desolation in their paths..." In: The Atmosphere, 1873. From the work of Camille Flammarion. This time of year brings to mind the threat of tornadoes. Tornadoes are most common in the Central Plains and southeastern United States, and most North Carolina tornadoes occur in the southern portions of the Coastal Plain and Piedmont, including Cabarrus County. North Carolina tornadoes tend to move to the northeast along with their parent thunderstorm, but deviations and jumps are common. The typical tornado track in our state is a few hundred yards wide and a few miles long, although there is often a series of four or five tornadoes associated with a single thunderstorm, widening the path of destruction. The headline for the Concord Daily Tribune on Saturday, March 23, 1929 proclaimed "Several Hurt as Tornado Strikes County." On the previous day, Friday, March 22, a tor
Post a Comment
Read more
By Cabarrus Genealogy Society March 13, 2015 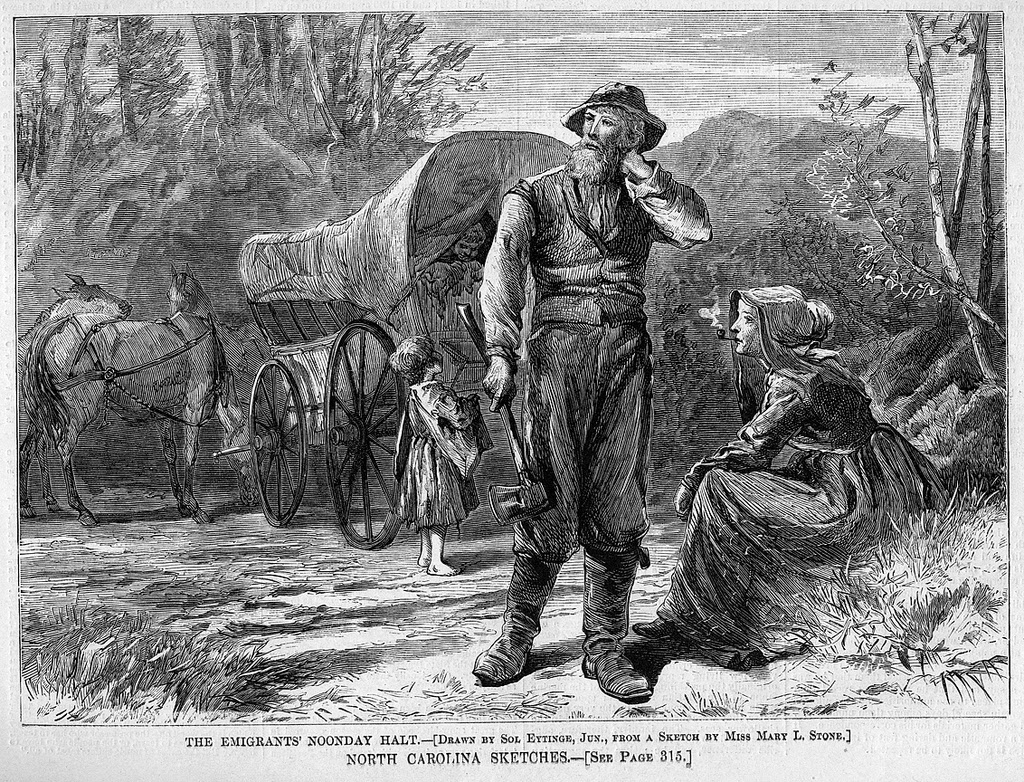 Illustration from Harper's Weekly, April 20, 1872. Courtesy North Carolina State Archives. The Road to Cabarrus Rose to Meet  18th Century  Scotch-Irish Immigrants Irish Potato Road, Irish Buffalo Creek -  these names, and the upcoming St. Patrick's Day celebrations, bring to mind Cabarrus' Scotch-Irish heritage. The Scotch-Irish were, in reality, Scotch Presbyterians who settled in Ireland.  Due to religious persecution and the want of land and economic opportunities, mass emigration began in eighteenth century, largely between 1720 and 1774. Many arrived in Pennsylvania and then spread south along the Great Wagon Road into the Carolinas and Cabarrus County, displacing the Catawba natives.  The following is excerpted from an essay called "Customs of the Scotch-Irish in Cabarrus County." Published in 1935 by Margaret Virginia Ervin Smith, she describes the lives of these early pioneers. The essay is in the book Historical Papers on Cabarrus Co
Post a Comment
Read more
By Cabarrus Genealogy Society March 02, 2015 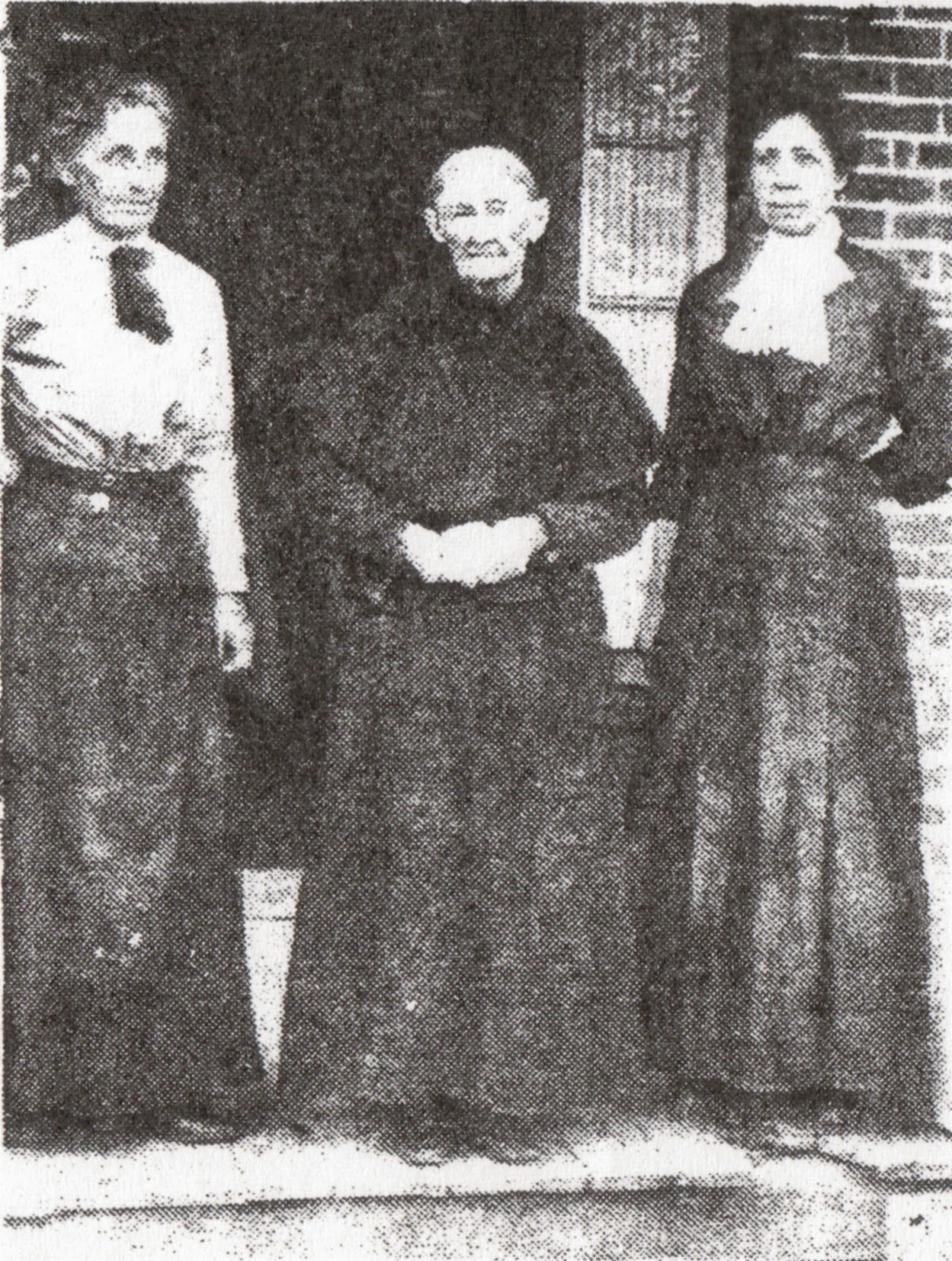 Remembering Cabarrus Pioneer Sophia House Ludwig March is Women's History Month. Here we remember Sophia House Ludwig, a woman who was a Cabarrus County pioneer and the daughter of a Revolutionary War soldier. The following text is taken from a memorial script by R. A. Goodman written in 1921, courtesy of the Eastern Cabarrus Historical Society and Museum. In Memoriam Mrs. Sophia Ludwig Mrs. Sophia House Ludwig with daughters  Augusta "Gus" and Lilly, date unknown. When Mrs. Sophia Ludwig, of Mount Pleasant, passed to rest on the 29th of January [1921], at the advanced age of 97 years, 4 months, and 14 days, Mount Pleasant, and perhaps Cabarrus, lost a woman greatly beloved and respected by the community and in many ways, besides her great age, remarkable and interesting. She was born on the 15th of September, 1823, the third daughter of Jacob House, a veteran of the Revolutionary War, and his wife, Sarah Barringer House. All of her several brothers and si
1 comment
Read more
More posts