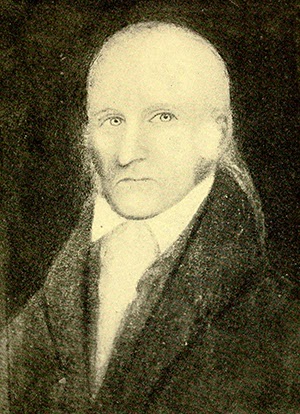 Cabarrus County's Poplar Tent Community Dr. John Robinson was pastor and teacher of Poplar Tent Presbyterian's classical school. Portrait ca. 1800. Courtesy of Archive.org . "Clustered around the name of Poplar Tent are woven some of the most sacred emotions, and no spot in the world has a richer heritage from the pioneers of the years long gone than this place. In intelligence, in patriotism, in all the high graces that endowed a proud and noble manhood and womanhood of the old school of the seventies the people of this section were richly endowed." So G. E. Kestler begins his reflections upon the history and contributions of the Poplar Tent Community to Cabarrus County, and to the United States. Kestler's letter to the editor appears on the front pages of the August 29 and August 30 editions of the Concord Evening Tribune in 1906. G. Ed Kestler was secretary-treasurer of H. L. Parks and Company, a Concord store which sold dry goods, shoes, clothing an
Post a Comment
Read more
By Cabarrus Genealogy Society August 26, 2014 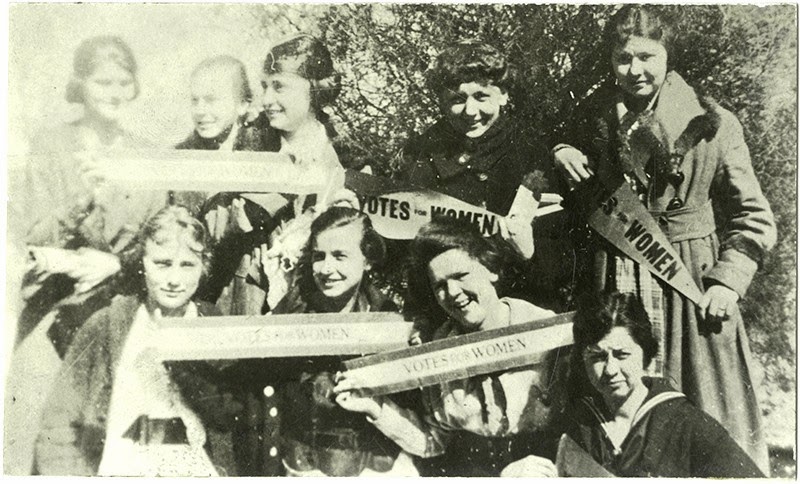 Cabarrus Responds to Women's Suffrage Students petitioning for women's suffrage in 1919. University Archives Photograph Collection, University Archives and Manuscripts, The University of North Carolina at Greensboro . On August 26, 1920, Secretary of State Bainbridge Colby certified the ratification of the 19th Amendment to the United States Constitution, which prohibits any citizen from being denied the right to vote on the basis of sex. By guaranteeing women the right to vote, the face of the American electorate was forever changed. On this anniversary of women's suffrage, we look back at the response of some Cabarrus County residents. The 19th Amendment brought dismay to most in the North Carolina General Assembly, but was publicly supported by at least two Cabarrus County men. In an article printed August 19, 1920, Concord Times Publisher/Editor J. B. Sherrill and Associate Editor W. W. Sherrill expressed disappointment only that Tennessee, and not North Carolin
Post a Comment
Read more
By Cabarrus Genealogy Society August 19, 2014 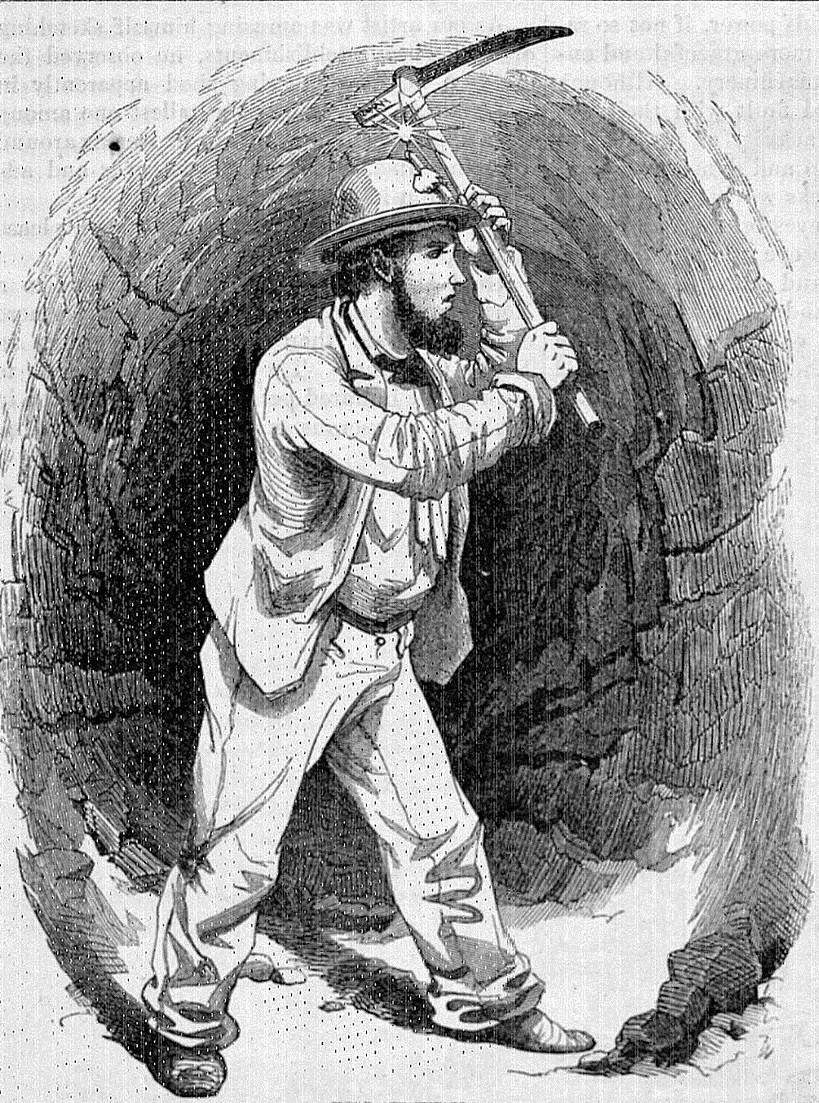 "Golden" Opportunities in Cabarrus County Courtesy State Archives of North Carolina. Most Cabarrus County people are familiar with Reed Gold Mine State Historic Site, location of the first documented gold discovery in the United States in 1799. But there were other mines in the area which helped to make the region the leading gold-producing area until the 1848 California Gold Rush. The early gold mining industry brought new people into Cabarrus County and provided new jobs for native Cabarrus folk. One newcomer was Dr. Otto Dieffenbach, a German chemist, geologist and mining engineer. Dr. Dieffenbach worked at the Phoenix Mine (currently the site of Green Oaks Golf Course) from 1854 to 1857. One of his letters written to family in Germany mentions his work near Concord, then details his travels in the eastern U. S. A discovery of deep gold veins required new mining techniques, including a chlorination process used and perfected by the Phoenix Mining Company around 187
Post a Comment
Read more
By Cabarrus Genealogy Society August 15, 2014 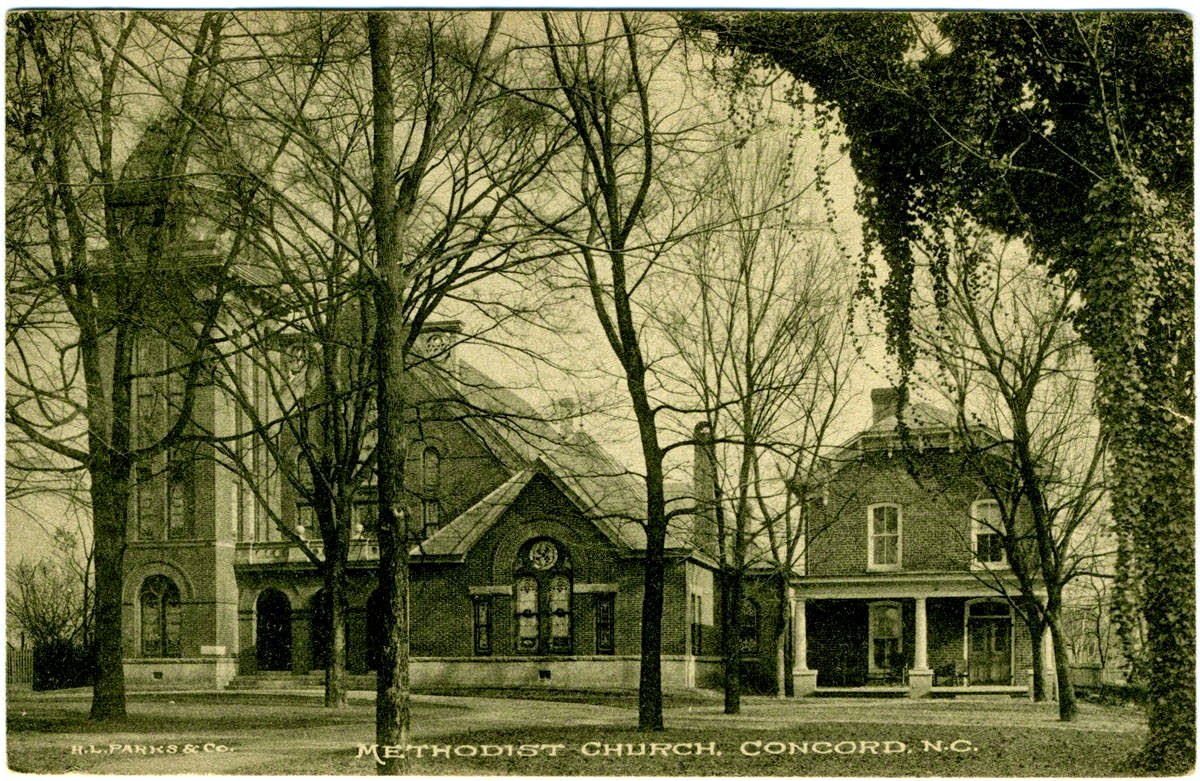 Heritage of Cabarrus County Churches Postcard photo circa 1910. Courtesy of the North Carolina Collection, UNC-Chapel Hill. Throughout Cabarrus County history, few institutions have served as a stronger focus of community life than it's churches. Long before the beginning of the county itself, most people in the area defined their business and social lives according to their church communities. The earliest days of settlement, most people's lives centered around the church. The church building and regularly scheduled worship services provided a place to meet neighbors and exchange news. The first schools in Cabarrus were church schools and the first ministers in the county were strongly influential and highly educated men in their communities. The earliest settlers brought their denominations with them; the Scot-Irish brought Presbyterianism and the Germans brought the Lutheran and Reformed faiths. Early congregations include Rocky River and Poplar Tent Presbyterian (
Post a Comment
Read more
By Cabarrus Genealogy Society August 12, 2014 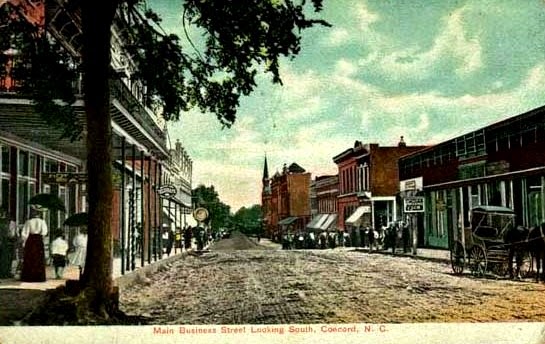 Cabarrus Walkways: First Sidewalks in Downtown Concord Ladies with parasols strolled the sidewalks and horse-and-buggy rigs plied the unpaved street in this postcart looking south on Union Street in Concord about 1908. Courtesy Julie Hanson Ganis . The first reference to sidewalks in downtown Concord are found in the 1876 Town Council Minutes. By the late 19th-century, sidewalks not only provided a safe path for people to walk that was separated from the road, but they were also associated with urban sophistication .   On August 13, Council received a petition calling for the widening and paving of East Depot Street (now Cabarrus Avenue) with sidewalk construction. On September 26, Council ordered two-foot-wide sidewalks to be laid out on each side of the street. Because may pages of the Concord Board of Commissioners/Town Council Minutes are lost, it is likely that the order to pave Union Street (also called Main Street) is not extant. Earlier record in 1838-1839 order street
Post a Comment
Read more
By Cabarrus Genealogy Society August 08, 2014 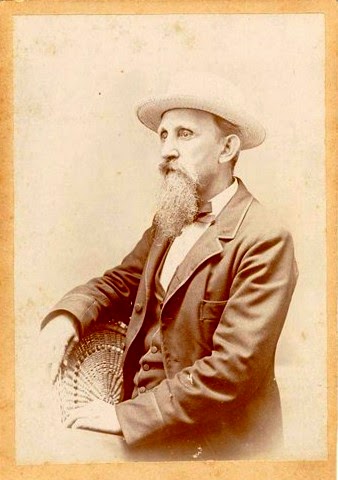 H. T. J. Ludwig and the Cabarrus School Tax Struggle Henry Thomas Jefferson Ludwig. Undated photo:  Courtesy of the Eastern Cabarrus Historical Society .  In August we think about students preparing for a new school year. Providing quality education has always been a concern for educators, legislators and taxpayers. The question of funding education has not been limited to the school bond referendums of recent years. Professor Henry Thomas Jefferson Ludwig wrote an article in the July 29, 1897 issue of Concord Times , urging Cabarrus voters to support the local school tax measure in the election scheduled for August 10, 1897: "Better schools with longer terms will add in many ways to the general prosperity of the people. They will make the county a more desirable place...to live in. Better school facilities in the county will tend to promote greater interest in farm life. Better schools in the county will render it unnecessary for farmers to move to town in order to educa
Post a Comment
Read more
By Cabarrus Genealogy Society August 05, 2014 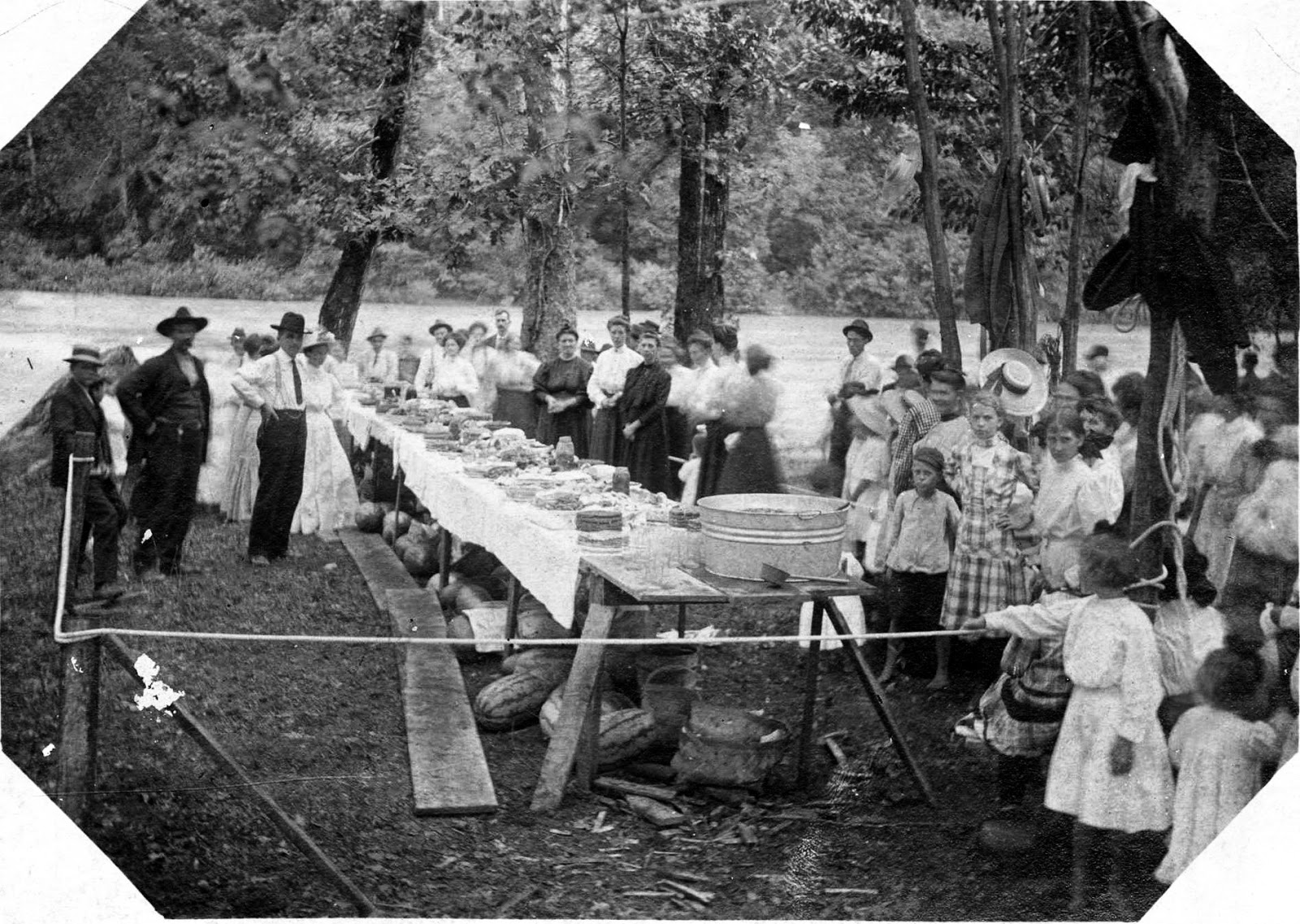 100 Years Ago: Cabarrus Life at the Outbreak of WWI Family and church activities remained at the center of Cabarrus life in August of 1914. Photo courtesy of Digital NC. Europe entered into WWI on July 28, 1914. In the first weeks of August 1914, leaders in Raleigh were concerned with the "demoralization of our foreign trade" with Europe and the effect on cotton and wheat prices. On a local level, Cabarrus County continued to focus on family and religious life. Most would not feel the consequences of war on a personal level until the U. S. entered the conflict in April of 1917. The following items came from The Concord Daily Tribune , August 4, 1914. Rocky River "Hot, dry weather prevails here. Crops are cut one-third off on account of drought and chinch bugs are doing considerable damage to the corn crop in this section. Mr. Henry Furr and Miss Bessie Furr, both of Harrisburg, were united in holy bonds of matrimony on last Tuesday, the young couple being join
Post a Comment
Read more
By Cabarrus Genealogy Society August 01, 2014 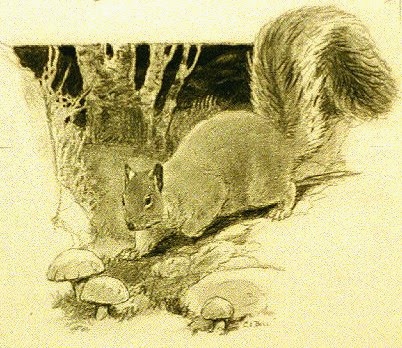 1826 Pastimes in Olde Concord:  Church, Lafayette Ball and the Giant Squirrel Hunt Courtesy of the Library of Congress. Social life in early Concord and Cabarrus County usually centered around the church and the county courthouse. For many ha rd-w orking people, weekly church services were a welcome chance to put aside household chores and farming tasks for a few hours to worship and visit with neighbors. Court sessions held four times a year provided opportunities to see old friends and transact business county-wide. There were other entertainments to be found, however; politics, civic organizations and various social clubs also provided focal points for persons of like interest to gather and socialize. One interesting entertainment was the LaFayette Ball. Although a year had passed since the visit of the Marquis de LaFayette to North Carolina (see Cabarrus Genealogy Society blog posting from May 16, 2014), the popular Frenchman and his travels through the country were stil
Post a Comment
Read more
More posts